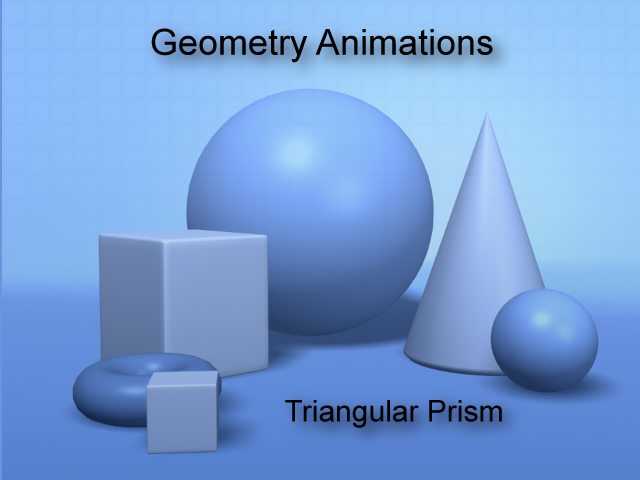 This is part of a series of video animations of three-dimensional figures. These animations show different views of these figures: top, side, and bottom. Many of these figures are a standard part of the geometry curriculum and being able to recognize them is important.

— CLICK THE PREVIEW BUTTON TO SEE THE VIDEO ANIMATION —

Study these animations to learn the basic properties of these 3D figures. In particular, make a note of their sides, edges, and vertices. Look for any symmetries they have. Look for polygon shapes that are familiar. Finally, think of real-world examples that use these  figures.

This is part of a series of video animations of three-dimensional figures. These animations show different views of these figures: top, side, and bottom. Many of these figures are a standard part of the geometry curriculum and being able to recognize them is important. Below we also include information about Platonic solids and 2D nets of these 3D figures.

Learn about the basics of 3D Geometry by learning about the Platonic Solids.Media4Math.com has thousands of digital resources for math. 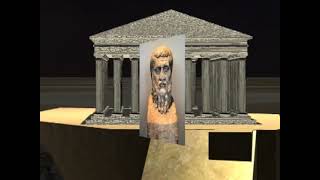 You can view the video here.

The video lasts for 3 minutes and 3 seconds.

IN ANCIENT GREECE THE PHILOSOPHER PLATO DESCRIBED A SET OF THREE DIMENSIONAL SHAPES THAT HAVE SINCE COME TO BEAR HIS NAME: THE PLATONIC SOLIDS.

LET'S START WITH THEIR TWO DIMENSIONAL COUNTERPARTS AND BUILD THEIR THREE DIMENSIONAL VERSION.

LOOK AT THIS EQUILATERAL TRIANGLE. IT IS A REGULAR POLYGON WHERE ALL SIDES AND ANGLE MEASURES ARE CONGRUENT. THIS TWO DIMENSIONAL NET WHEN FOLDED THIS WAY BECOMES THE THREE DIMENSIONAL SOLID CALLED A TETRAHEDRON, WHICH IS ONE OF THE PLATONIC SOLIDS. BECAUSE OF THE UNDERLYING REGULAR POLYGON, THE TETRAHEDRON HAS CONGRUENT EDGES, VERTICES AND ANGLES.

NOW LOOK AT THIS SQUARE, WHICH IS A REGULAR QUADRILATERAL. WE USE THAT SQUARE TO CONSTRUCT A TWO DIMENSIONAL NET. WE FOLD THIS NET TO CONSTRUCT A CUBE, WHICH IS ANOTHER PLATONIC SOLID ALSO REFERRED TO AS A HEXAHEDRON. THE "HEX" IN HEXAHEDRON REFERS TO SIX, WHICH IS THE NUMBER OF SIDES IN A CUBE. LIKE THE TETRAHEDRON THE EDGES, VERTICES AND ANGLES OF THE CUBE ARE CONGRUENT TO EACH OTHER.

THE OTHER PLATONIC SOLIDS INCLUDE THE EIGHT-FACED OCTAHEDRON...

WITH ALL THESE FIGURES, THE UNDERLYING REGULAR POLYGON SHAPE ENSURES CONGRUENT EDGES, ANGLES AND VERTICES.

UNDERSTANDING THE PROPERTIES OF THESE FIGURES HELPS US UNDERSTAND CERTAIN NATURAL AND MAN-MADE STRUCTURES THAT SHARE THESE PROPERTIES.

IN PARTICULAR, THIS PROGRAM WILL COVER THE FOLLOWING KEY CONCEPTS:

Now that you have seen the video about the Platonic Solids, let's investigate three-dimensional figures in more detail. These figures have certain properties that can be analyzed and categorized.

This is a cube. It is a Platonic Solid, also known as a hexahedron. 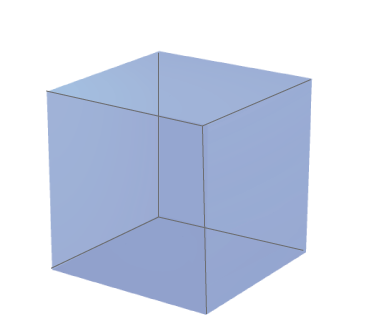 The surface of the cube is made up of six faces. Each of the 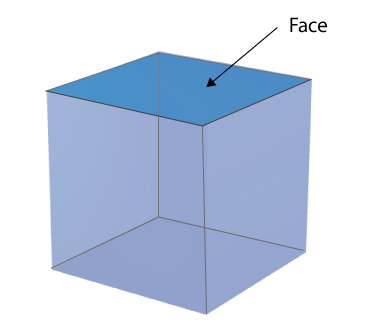 Where the faces intersect is known as an edge. A cube has twelve edges. Do you see the twelve edges of this cube? 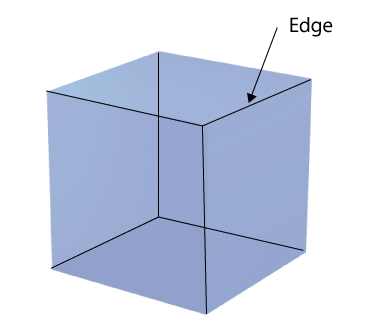 The corners of a three-dimensional figure are known as vertices. A single corner is called a vertex. A cube has eight vertices. Do you see the eight vertices of this cube? 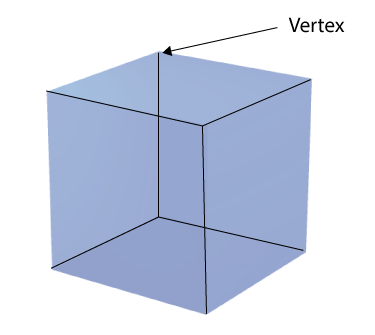 Different three-dimensional figures have different numbers of faces, edges, and vertices. Here is a square pyramid. Do you see the square base of this pyramid? Do you see the four triangular faces? 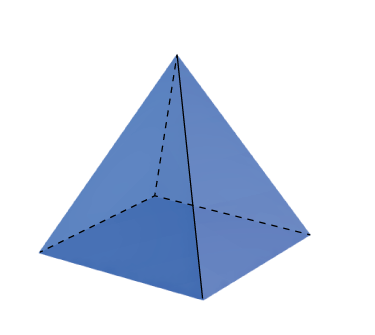 The square pyramid has 4 faces, 8 edges, and 5 vertices.

Here is an octahedron, which is another of the Platonic solids. The octahedron is like two square pyramids attached at the base. 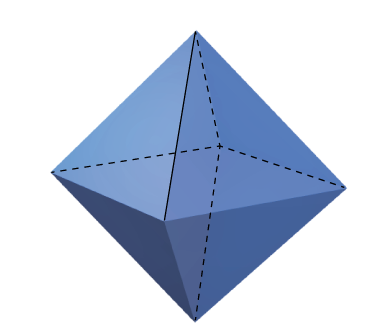 What Is a Net?

Now that you have seen these different three-dimensional figures, did you notice many of them had two-dimensional faces? For example, a cube has eight square faces, while a cylinder has two circular sides.

Many three-dimensional figures consist of two-dimensional part. In fact, with many 3D figures, we can break them down into 2D components. This can be done by using a net.

A net is a two-dimensional version of a three-dimensional figure. A printed net can be used to build the 3D model. Here are some examples of nets. 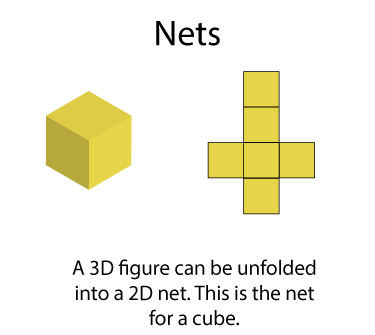 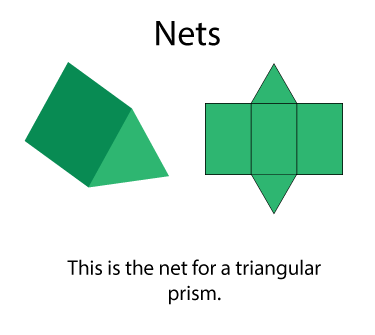 This is the net for a square pyramid. Notice how the square base connects with the four triangular bases. This net will fold into a pyramid. 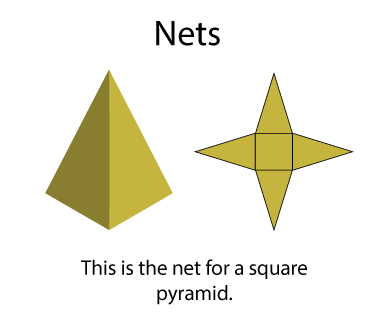 Even circular figures can be modeled with a net. Here is the net for a cylinder. Notice how the circular the circular sides of the cylinder align with the rectangular side. 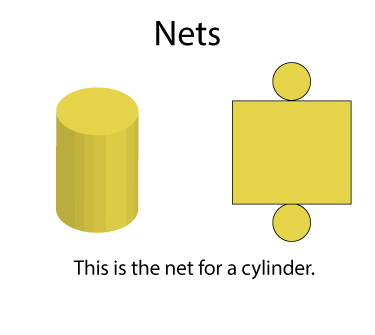 This animated sequence shows a cube from top to bottom.