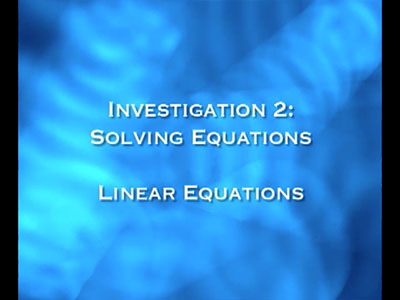 Watch this video about variables and equations. (The transcript is included.)

China, India, the Islamic world, and all the way up to the Renaissance and the present, equations have played a central role in the development of algebra.

Hello. My name is Monica Neagoy.

And I will guide your exploration into the world of variables and equations with the help of the TI-Nspire.

In this program, I'll describe the fundamentals of the equations and introduce the two most basic types of equations you'll encounter in a beginning algebra class, linear and quadratic.

In the first investigation, we'll do a quick historical overview of equations, examine the building blocks of equations, and look at the multiple uses of variables in equations.

In the second investigation, we'll dive into solving equations, beginning with linear equations and then quadratic equations.

Two aspects of the history of algebra are of interest here, the evolution of its notation and the development of its subject matter.

Namely, what is algebra? Developed by the Babylonians, rhetorical algebra was dominant until the 1500s.

Rhetorical algebra was predominantly oral, as writing materials were limited in most cultures.

Algebraic symbols that are commonplace today were unknown.

Whenever mathematicians did transcribe algebraic equations onto clay tablets, for instance, they wrote out every word.

For example, the equation 3x equals 1/2 x plus 10 would have looked something like this.

"Three times a certain quantity has the same value as one half the same quantity increased by ten."

Here we begin to see abbreviations for unknown quantities and for frequentlyused operations.

But these varied from country to country, as each country created its own.

And syncopated algebra was not consistent, as it did not follow clearly stated rules.

The third and final stage, called symbolic algebra, began with the Renaissance mathematicians.

From the mid-1500s to about 1700, algebra symbols for operations, variables, relations, grouping, exponents, and so on were born, evolved, and matured.

So algebra's symbolic notation used around the world today has only been used for roughly 300 years.

Regarding algebra's subject matter, it's fair to say that up until the 18th century, algebra was about solving equations.

This algebra, called elementary algebra, is a generalization of arithmetic and is the focus of most high school algebra courses.

During the 19th century, a new kind of algebra was born. It's called modern algebra or abstract algebra.

While this advanced algebra is beyond our scope, you can still remember two important points.

The variables don't always represent generalized numbers, but other objects or structures.

And therefore, the properties of operations among those objects don't always hold.

For example, A times B equals B times A is not true if A and B are matrices.

Even if modern algebra is beyond our scope, it's important to know that algebra has different meanings depending on what mathematical objects are being studied.

We're now ready to examine the building blocks of equations.

In this video segment, get an overview of variables and equations, along with the evolution of algebraic notation.